We live one block from a large beautiful bay. In our neighborhood, there is a tiny beach on the bay. We often walk to the beach to watch the sunset and sailboats; it is just so beautiful. Sometimes, we even see dolphins!
About a month ago, we bought some highly rated inflatable kayaks. We are here only one more year and decided spending the money on two pvc two-person kayaks was too expensive, but renting each weekend was also getting expensive. I calculated that if our inflatable kayaks last six times they will more than pay for themselves. More than that is simply cake.
We take our kayaks to our little beach one day each weekend. Last weekend was no different. We got all set-up and as we were putting our boats in the water, we saw two dolphins, or at least we assumed they were dolphins. They swam far ahead pretty quicky, never jumping out of the water. They appeared to work together to corral the fish, each coming in at a 45 degree angle from each other. This was followed by a big commotion in the water, then by a huge flock of birds settling on that area of water. We turned off before reaching that area.
As we talked more and more, we thought the fins were not actually bent like dolphin fins, though maybe they were? We never saw the animals jump out of the water. And, they actually swam rather straight and fast. Apparently, sometimes smaller bull sharks make their way into our bay. Now, we are wondering??? 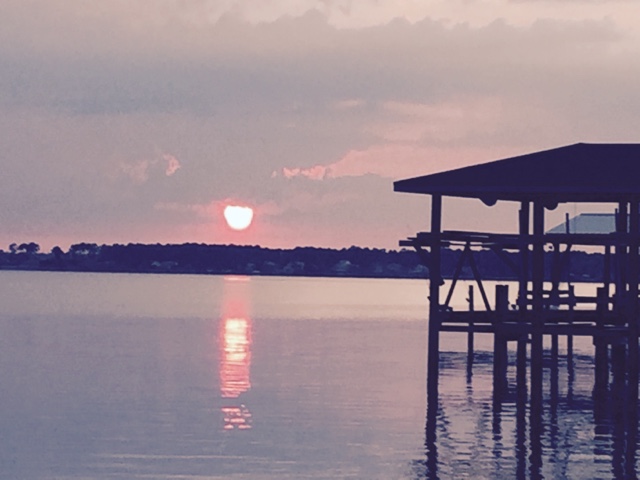 Posted by The Stone Rabbit at 6:25 PM

Those animals, whatever they were, sure left a lot of half-eaten fish behind.

Yikes! Be careful out there!

Having some doubts about those inflatable kayaks for sure! But we so often so others in the bay with far less sturdy flotation. I guess it is similar to the risk of going to the ocean and playing in the water. I don't know? I think the rule of thumb will be "if in doubt, GET OUT!" Yikes.

The Stone Rabbit
I am a Mom to two beautiful boys and one former street dog. My husband and I married just out of college many years ago. We are a US State Department family. I recently completed my MBA with a concentration in finance. I am working from home as a contractor in my pre-MBA field (state legislative policy). I am hoping one day to meld my life and work experiences together with my recent education. This blog is about our adventures here, there and everywhere. It is also about our personal journeys and thoughts all along our way. ***Standard disclaimer - the opinions in this blog are my own and in no way intentionally reflect any official opinion of anyone else, anywhere.***